There is quite the local storm brewing about the proposed development for the vacant site northeast of 44th Avenue and Harlan Street, location of the demolished Lakeside Mall.  Let’s make it clear that ArcWest is always interested in new development and the proposed building projects that go along with it. New development is a primary “fuel” for the architectural services engine.  We believe the point to be raised in looking at the proposed (and debated) Lakeside redevelopment plan is that there is a tremendous opportunity to create a development for this site that could be an incredible addition to the area and surrounding neighborhoods.

When you consider all the positive attributes of the site: the location adjacent to Lake Rhoda, the size of the parcel, the visibility from the interstate, the unique character of the folks living in the community of Wheatridge, the local Berkely and Highlands neighborhoods … The proposed development illustrated sorely misses the mark in reaching it’s potential. 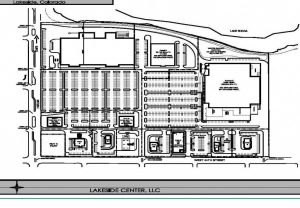 The open sea of parking with minimal landscaping ringed by single points of box retail stores is classic suburban planning of 20 years ago.  The development completely turns it’s back on the biggest amenity of the site: Lake Rhoda.  There is no attempt to create pedestrian avenues that weave through the buildings and site to integrate the commercial buildings with mixed uses,  landscaped green space with parking and take advantage of the lake as a primary feature.

ArcWest visualizes a more exciting opportunity looking at the dynamic nature of the Tennyson Street district (between 38th and 44th Avenues) for example.  Architects, planners and developers should take inspiration from the mixed use, pedestrian friendly 2 and 3 story buildings, moderate density fabric of this street.  We believe an urban plan of buildings of similar diversity and scale integrated with open space parks that link to Lake Rhoda could be a concept which would offer so much more potential to the immediate and adjacent communities.

The debate about the redevelopment appears to center on the rejection of  a mainstream “big box” brand as the primary culprit.  Leaving the “Mega Store” debate to the side, the real issue is the integration of an oversized retail building (whatever variety) in a concept of suburban sprawl and a dated model of development.   In contrast, by taking the approach of an urban environment integrating public plazas, art and sculpture, patios for eating, with moderate scaled buildings supporting mixed use of retail and living, a sustainable environment is achieved that inspires surrounding areas to achieve the same or beyond.

The Belmar development of the former Villa Italia Mall is an excellent example and model for what the Lakeside Redevelopment could be striving for.   A destination urban district which integrates mixed use of retail, residential, commercial with open public amenities.

This debate should be more about creating a change for the better: an enhanced concept for livable communities, sustainable growth promoting a healthy human environment that might even last for generations.  The proposed redevelopment plan will be obsolete before it’s completed.